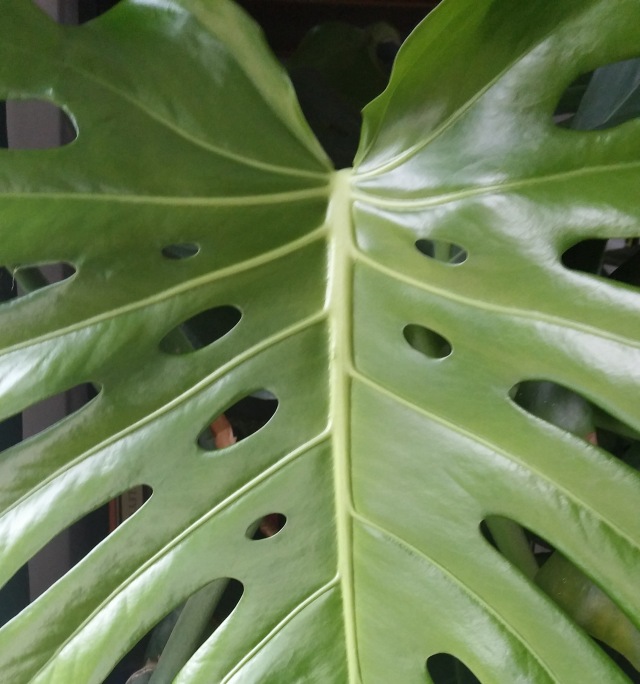 This is my oldest houseplant – jokingly named Austin (as in Austin Morris a long-defunct British car manufacturer) – a Monstera deliciosa  purchased in Leicester Marks & Spencer in 1987, when I was in the last year of a degree in English and Politics.

I had owned houseplants before, but I was not possessed of green fingers and they all died horribly, much to the dismay of my mother. But this one survived and grew; it moved back home with me on the train when I left. The Monstera became the first of many plants, and the first of many moves with all of them. I have taken cuttings and given them away, and several times cut down and repotted the original plant so as to ensure it remains a feasible size and shape to fit in a small home. By my estimates I have moved house about 20 times, and each time taken this plant with me. The last move required help as it has grown too large for me to move easily by myself -see photo! 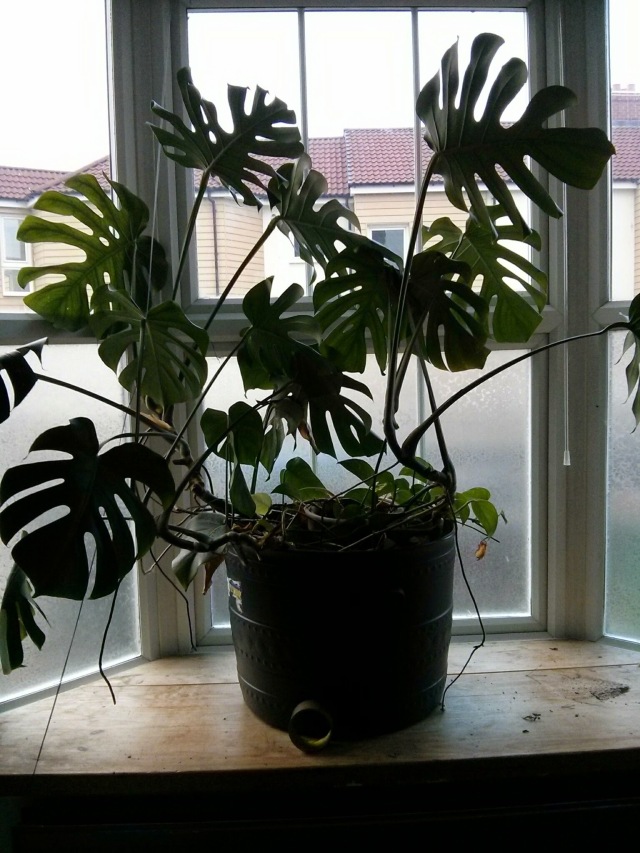 When I bought the Monstera I had no real interest in plants, I was just a bit lonely in a house full of medical students from another university and wanted another living thing to keep me company. But something about the cool of the leaves, and the vibrancy of their life attracted me. Over time I acquired many more houseplants; it was a long time before I had any outdoor space so the thought of garden plants didn’t arise. I read as much as I could about their origin and care, and filled my desk in an insurance company with plants.

In my late twenties, stuck for a life plan and bored with my job I decided to take a correspondence course in horticulture. None of the courses ever mentioned indoor plants, but I figured that plants were plants, so it wouldn’t really matter. By the time I was in my early 30s I had changed jobs and was working (oddly enough, sometimes in the houseplant area) in a garden centre. A very large proportion of my income went directly into the till, as working with plants creates an almost inexhaustible hunger for new ones. Having now worked in horticulture in several different roles for nearly twenty years, I often look at Austin and wonder what would have happened if I hadn’t needed some company in 1987.

My very small flat is currently home to about 60 houseplants, and I will tell some of the stories that attach to each plant. If  you have a houseplant story, or have lived a life full of houseplants, let me know.

Living in Kent, I am a qualified horticulturist, currently self-employed as a gardener Herne Bay & Whitstable areas; I sell houseplants and airplants at markets locally. View more posts

This site uses Akismet to reduce spam. Learn how your comment data is processed.